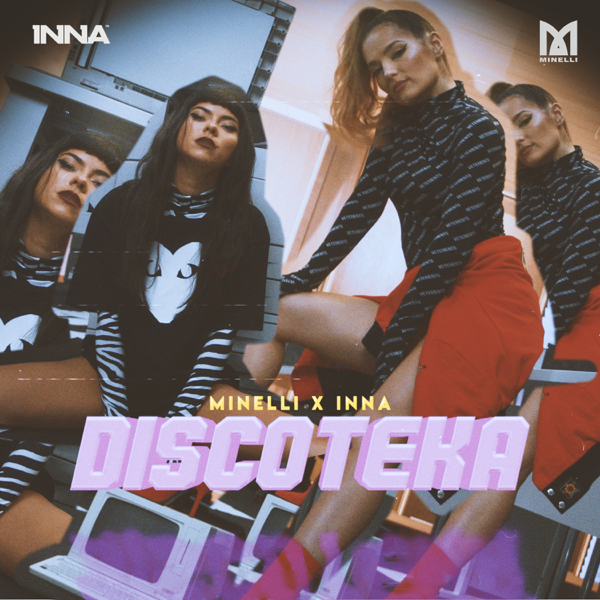 2020 may have not been a great year but it doesn’t stop summer dance hits from dominating the world over, and this collaboration between Minelli & INNA, titled “Discoteka”, is set to get you moving! This release follows up Minelli’s single “Separated” and INNA’s single “Nobody“.

Minelli, real name Luisa Luca, is a rising Romanian singer who started out as part of the band Wassabi, she then focused on a songwriting career before releasing her own music. She first started out by collaborating with Vanotek before releasing solo tracks, going on to have success with the songs “Empty Spaces” and “Mariola”. She has collaborated with a variety of artists including Morandi and SICKOTOY – the latter of which was on the hit single “Addicted”. She’s one of many Romanian female artists who are bringing it at the moment, and we’re excited to see where her career takes her.

As for INNA, real name is Elena Apostoleanu, she is one of the biggest Romanian female artists around at the moment, having gone on to have international success with her early singles such as “Hot”, “Amazing”, and “Sun Is Up”. She continued her success with a variety of singles that have hit over 100 million views on YouTube including “Ruleta“, “Gimme Gimme“, and “Heaven“. She has collaborated with some of the biggest artists and DJs including Flo Rida, Pitbull, J Balvin, Daddy Yankee, Martin Solveig, Sak Noel, and Dannic, to name a few. Last year, she dropped her sixth studio album, YO, which saw her take creative control, spawning the singles, “RA”, “Iguana”, “Sin Ti”, “Tu Manera”, and “Te Vas“. We also managed to speak to INNA in an exclusive interview about the album. Now she’s working on a new era with the release of “Bebe” with Vinka, “Not My Baby”, “Sober”, and recently “Nobody” which we completely adore, as well as collaborating on Yellow Claw’s track “Baila Conmigo” with Saweetie and Jenn Morel, and releasing “VKTM” in collaboration with SICKOTOY & TAG. We also expect the third issue of INNAMag after she released issue one and issue two last year.

According to Spotify, this sure-fire hit song has been written by Alex Cotoi, INNA, Marcel Botezan, Minelli, and Sebastian Barac, whilst it has been produced by Alex Cotoi. The music video has been created by NGM Creative, directed by Bogdan Paun with Alexandru Muresan acting as director of photography. The script was handled by Andra Marta and Cristina Poszet, and it has been produced by Loops Production.

“I’m happy to have collaborated with INNA and I hope that ‘Discoteka’ will entertain all its listeners. Let’s spread some good vibes!”, declared Minelli, in a press release.

Are you ready to party? Minelli and INNA tell us to dance in the lyrics of this song and we sure do! Their voices sound superb on this track, with Minelli really shining throughout bringing this style into our music playlists and INNA adding her soft sweet vocals to the sound too. INNA already has such a massive platform and she really introduces Minelli to the world with this great collaboration. We’ll be surprised if “Discoteka” isn’t stuck in your head after one play.

The music video starts off in an office setting, with the two female singers messing about with the photocopier. They later move to what looks like an airport waiting room, before performing in a studio. It’s another great performance music video, only INNA seems more laid-back than usual, giving Minelli the spotlight throughout – and maybe that’s INNA’s plan all along from the song to the music video. Throughout, both Romanian singers bring fashion, from Burberry to Vetements, and we’re living for the looks that they are serving throughout.

“Discoteka” is available to download and stream right now, via Global Records.

What do you make of Minelli & INNA’s new single and music video “Discoteka”? Let us know on Twitter @CelebMix.