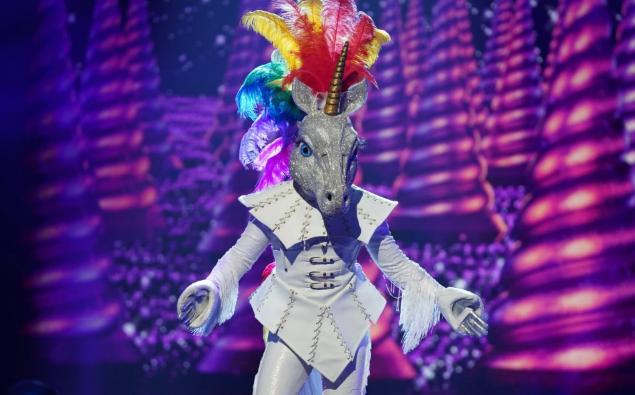 The competition is hotting up on The Masked Singer UK and during the latest episode, another celebrity was been revealed to the public.

Previously, the celebrities have been split into groups for their battle rounds, however, this week all of the remaining celebrities took to the stage. Kelly and Sharon Osbourne also made a guest appearance on the panel, standing in for Ken Jeong this week.

Two celebrities were unmasked during this week’s episode. Despite their sensational performances each week, Duck was unmasked and revealed to be Skin from Skunk Ananise, whilst it was also time for Unicorn’s identity to be unveiled.

But who is Unicorn?

With names including John Barrowman and Glee’s Chris Colfer being thrown in the ring, Unicorn was in fact Scissor Sisters front man Jake Shears.

Many people at home clocked on to the true identity of Unicorn from the off, whilst guest panelist Kelly Osbourne figured out the celebrity behind the mask thanks to an unusual clue involving her father Ozzy Osbourne once seeing Jake naked.

Speaking about taking part in the show, Jake said: “I have had the time of my life, I’ve been having so much fun. I can’t keep my arms down!”

When asked by Joel about why he decided to take part, Jake stated “I mean it’s just right up my alley. It was a no brainer for me, I was so excited! It’s been an absolute blast.

The Masked Singer UK continues next Saturday on ITV, where the remaining five celebrities will be competing in the semi-final. With the competition hotting up, will the panel be any closer to identifying who’s behind the mask?

Another TWO celebrities will be unmasked next week – we can’t wait!