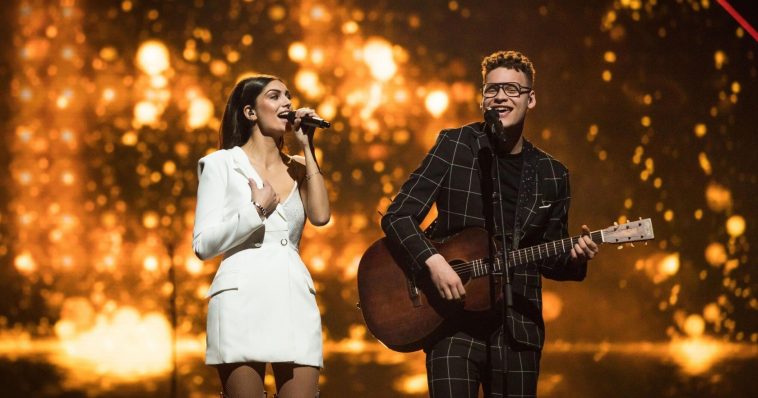 Ben & Tan have just been announced as Denmark’s representatives for Eurovision Song Contest 2020.

Ben & Tan were selected after their song ‘Yes’ won Denmark’s national selection show, Melodi Grand Prix, which took place on March 7. The duo is now set to represent Denmark at this year’s Eurovision in Rotterdam. Denmark will participate in the second semi-final on May 14.

This year, Melodi Grand Prix took place in Royal Arena in Copenhagen, which was supposed to seat 10,000 excited Eurovision lovers. However, the 10 acts instead performed in an empty arena due to the Danish authorities encouraging organizations to postpone or cancel all events with more than 1000 visitors as a measure to prevent further spreading of the Coronavirus. But as they say in showbiz, the show must go on – and indeed it did!

After the 10 acts had performed, the jury and viewers selected their three favourite songs which would continue to the final. Apart from Ben & Tan’s ‘Yes’, ‘Screens’ by Sander Sanchez and ‘Ville ønske jeg havde kendt dig’ by Emil were chosen to compete in the final. In the final, Ben & Tan won with 61% of the votes.

17- year-old Ben (Benjamin Rosenbohm) and 21-year-old Tan (Tanne Amanda Balcells) met on the Danish X Factor in 2019, where Ben placed second and Tan placed fourth with the girl group Echo. Their song ‘Yes’ was written by Emil Adler Lei, Jimmy Jansson and Linnea Deb. Deb has previously proven that she knows how to write a Eurovision hit. In 2015, she was one of the creative forces behind Måns Zelmerlöw’s hit ‘Heroes’ which secured Sweden another Eurovision win.

The Eurovision 2020 acts that have been announced so far are Blas Cantó for Spain, Hooverphonic for Belgium, VICTORIA for Bulgaria, Sandro for Cyprus, Vincent Bueno for Austria, Arilena Ara for Albania, Tornike Kipiani for Georgia, Jeangu Macrooy for the Netherlands, Vasil for North Macedonia, Tom Leeb for France, Benny Cristo for the Czech Republic, Eden Alene for Israel, Stefania for Greece, Montaigne for Australia, Samanta Tina for Latvia, Diodato for Italy, Destiny Chukunyere for Malta, Roxen for Romania, THE ROOP for Lithuania, Ulrikke Brandstorp for Norway, Athena Manoukian for Armenia, Alicja Szemplinska for Poland, James Newman for the UK, Samira Efendi for Azerbaijan, Ana Soklic for Slovenia, Ben Dolic for Germany, Uku Suviste for Estonia, Daði og Gagnamagnið for Iceland, and Natalie Gordienko for Moldova. The remaining countries are expected to reveal their acts in the coming weeks.

Do you think the rest of Europe will ‘say yes’ to Ben & Tan? Let us know your thoughts on Denmark’s Eurovision entry by sending us a tweet!