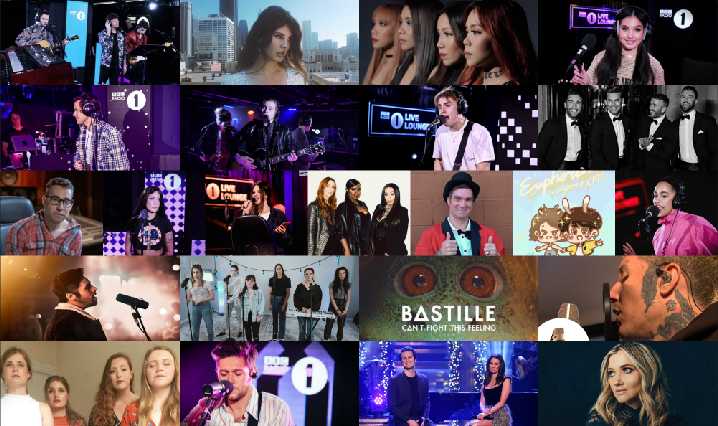 As with every year, 2019 has seen many artists release covers of a wide range of different songs from fellow artists, from well-known popular songs to treasured tracks that fans love. Covers are a great way for rising artists to attract new fans, get their name out there, and engage with a new audience; not to mention, potentially, being seen by the artist they are covering.

New artists are not the only people who do covers though, what with BBC’s Radio 1’s Live Lounge still as popular as ever, high-calibre artists can be heard switching up another artist’s track for the Live Lounge and it’s impossible not to love these covers. BBC Radio 1 isn’t the only radio show that allows artists to cover tracks, plenty of radio shows around the world have live performances by artists, and sometimes they perform cover songs too. On top of all that, with the rise in social media, you may just see your favourite artists covering songs on Instagram, Twitter, Facebook, YouTube, Snapchat, or TikTok.

With the number of unforgettable covers in 2019, we have decided to compile all our favourite covers that were released last year. We’re also excited to see what new covers 2020 will bring.

“Both the Jonas Brothers and Lewis Capaldi have been some of my favourite artists of 2019, so this cover saw both of my worlds collide and, unsurprisingly, I loved it! Both Joe and Nick got to show off their impressive vocals and overall, it’s just a beautiful cover. I also love the fact that Lewis later repaid the favour by covering ‘Sucker’ on The Elvis Duran Show!”

“Lana Del Rey’s cover of ‘Doin’ Time’ maintains the original’s smooth, simple, and easygoing melody while simultaneously adding the singer’s signature, soft and sensual sound to the mix, giving the song an entirely new feel. Del Rey’s effortless way of making the song her own shows how truly remarkable and talented she is. As such, ‘Doin’ Time’ fits right into the middle of her sixth studio album, Norman F*cking Rockwell.”

“For the last few years, I’ve been saying that 4th Impact should’ve won The X Factor UK series 12, and their audition became The X Factor UK‘s most-watched video on the show’s YouTube Channel with over 150 million views, in 2019. For those past few years, they’ve released their own singles and done a whole host of covers on their YouTube Channel, but gosh this is certainly one of their best. Not only is Queen’s ‘Bohemian Rhapsody’ one of the hardest songs to ever sing, but it’s also a song many choose not to cover, but 4th Impact impresses to no-end, making it their own and giving us harmonies for days! As usual, their vocals are off the charts, and this is one powerful and incredible cover – why these girls aren’t superstars yet, I’ll never know!”

Check out our thoughts on 4th Impact’s cover of Queen’s “Bohemian Rhapsody”.

“2019 was Mabel’s year. Not only did she release worldwide hits, but she also made some fantastic covers. My favourite cover of the year was her version of Little Mix’s hit single ‘Touch’, which Mabel managed to make her own. It will be interesting to see what Mabel will do in 2020.”

Mabel recently released a Christmas single titled “Loneliest Time Of Year”, check out our article on it.

“Iconic, incomparable, and he did it while having a cough. What can’t Harry Styles do?”

Check out our gig review of Harry Styles Live In London at the Camden Electric Ballroom.

“Playing BBC Radio 1’s Live Lounge seems to be one of the highlights in every artists’ career at some point. 5 Seconds Of Summer played their fourth BBC Radio 1 Live Lounge this year and, like before, I was immediately in love with their cover. ‘Dancing With A Stranger’ became some sort of a guitar pop-rock ballad, which makes my heart sing to this day when the boys’ harmonies take over and make this song their very own.”

Read our article on 5 Seconds Of Summer being back on the road with their 2020 No Shame Tour.

“A power voice performing an incredible song! As Sam has a rocky style, he made the song his own and it suited the tone amazingly.”

Check out our album review of Sam Fender’s Hypersonic Missiles.

“My fave cover song is ‘September’ by The Overtones (a very good band) and I love their song because it’s so upbeat and particularly, I love how they bring their own vibe to ‘September’.”

Check out our gig review of The Overtones’ Christmas Party at the Indigo O2, London.

“I’ve had a low-quality YouTube video of Jack Antonoff and Lorde’s version of Paul Simon’s ‘Me And Julio Down By The Schoolyard’ on loop for a couple of years now, so when Antonoff’s solo version was released as part of The Secret Life Of Pets 2 soundtrack this year, I was delighted. The producer extraordinaire puts his own Bleachers-esque spin on the cover, which jumps back to life in style.”

Read our news article about the announcement of The Secret Life Of Pets 2.

“Turning an upbeat pop track into a sultry, slow R’n’B jam, Halsey brought a whole new vibe to the Jo Bros’ comeback single. Her cover landed straight into my favourite Live Lounges of all time with the sheer sexiness she brought to the table here. Halsey, you did THAT.”

Read our article about Halsey’s full BBC Radio 1 Live Lounge performance where she performs “Nightmare” as well as the Jonas Brothers’ “Sucker”.

“BBC Radio 1’s Live Lounge always brings some magical moments during the year and Lana Del Rey covering Ariana Grande was one of these. This chilled-out version of the track showcased Lana’s effortlessly beautiful vocals with a dose of sass for good measure.”

Check out our article about Lana Del Rey covering Ariana Grande’s “break up with your girlfriend, i’m bored”.

“The original lineup of the Sugababes have made a triumphant return after years of inactivity – and this time, they’ve teamed up DJ Spoony for their take on Sweet Female Attitude’s ‘Flowers’, a UK Garage classic which was first released in 2000. Their cover takes the song to another level – with strings and a lush orchestral vibe throughout, and can I just mention those AMAZING harmonies from Mutya, Keisha, and Siobhan? I was already a massive fan of the original version of the track, and I still am, but this was a cover very well done in my opinion – it is different from the original, but it has its own unique sound which I’m sure listeners will love.”

“‘This Is Me’ immediately became an iconic song and one that I love, I didn’t realise I needed a pop-punk version of it until New Found Glory did just that. Full of energy, they took the song into their own genre while keeping its meaning.”

We managed to exclusively interview Jordan Pundik & Cyrus Bolooki from New Found Glory about their album From The Screen To Your Stereo 3, you should so check it out.

“Chymes made it to the list of BTS’ music recommendations and I am not at all disappointed. The song ‘Dreaming’ is a breath of fresh air in the genre. Her cover of Jungkook’s ‘Euphoria’ is one of my favorite covers of the song, as it manages to retain the original feel, while at the same time providing us with a fresh rendition. There is a very fine line between Chymes’ modifications and the original single, and discovering it leads to a feeling of ecstasy and giddiness which is a mark of a skilled artist.”

“I chose it because, even though Jorja sings every song so effortlessly, the arrangement was so beautiful and fitted her voice perfectly. Almost as if the song was written for her.”

Check out our thoughts on Jorja Smith’s music video “The One”.

“In 2019, I was particularly blown away by Ben Haenow and Rex Pearson’s epic cover of ‘Street Spirit (Fade Out)’ by Radiohead. By teaming up with an ensemble of exceptional musicians, Ben and Rex showed the world how a collaboration should be done. Their live rendition, which was filmed at Hurtwood House, is a visual and aural masterpiece. Everyone involved should be proud as they definitely did Radiohead’s single justice.”

“We all love Lewis Capaldi, and 2019 was definitely his year in music. That’s why I wasn’t surprised to see numerous musicians covering his songs. Yet, my favourite cover must be Cimorelli’s. These girls are such great harmony with each other, and that’s something you need to properly cover this beautiful song.”

Read our recent article about Dani leaving the band, Cimorelli.

“I am obsessed with Dan’s voice from Bastille! And I am always obsessed with the annual John Lewis Christmas advert. So the combination of the two things together is literally a win-win situation for me… and also magic to my ears. On paper, Bastile covering REO Speedwagon is quite possibly one of the most random ideas any A&R person has ever had, but the British band’s re-working of the song feels so right! It’s so festive, so emotive, and the perfect song to end all of our 2019’s.”

Read our article about Bastille releasing their album Doom Days.

“This song shows just how flexible lead singer Oli Sykes’ vocals can be and even how adaptable the rest of the band are. The band puts their everything into each song they sing and it’s exactly what they’ve done here too.”

Read our article about Bring Me The Horizon’s single “Medicine”.

“I first heard band Archie after seeing dodie repost their cover of her song ‘Human’ earlier this year, and I think it’s safe to say I clicked that Instagram follow button faster than I ever have before! Their series of ‘bathroom covers’ are incredible- the acoustics of the room combined with their phenomenal harmonies is simply gorgeous.”

“‘Circles’ is such a big song and hearing Niall’s vocals on it was amazing! A collaboration between the two singers is something that needs to happen. I loved the stripped-down acoustic version of it. I hope he covers more songs soon.”

“I have been a fan of both Lea and Jonathan since watching Glee and have always loved their friendship and performances both on and off the show. This song is my favourite from Lea’s Christmas album, Christmas In The City. Lea and Jonathan’s voices blend together perfectly and create a magic that is really rare.”

Check out our article on the announcement of Lea Michele’s Christmas album Christmas In The City.

“Hearing Sarah cover this Christmas carol in the Union Chapel venue in London was absolutely breathtaking. She has such an angelic voice and the moment she stepped off the mic to perform completely acapella and unplugged will stay with me for life. Nobody has ever delivered a version of this classic quite as beautifully before.”

Read our recent news article about Sarah Darling confirming new Campfire Sessions and releasing the single “Cowboy Take Me Away”.

Now those are some incredible covers right there, but we’re sure that 2020 will bring some amazing covers too, so be on the lookout. 2019 was such a great year, with a whole host of incredible releases, events, memories, and media that we asked our writers to choose their favourites from various categories. Check out our 2019 favourite Albums, EPs, Singles, Underrated Singles, Album Tracks, Music Videos, Debut Artists, Films, TV Series’, YouTube Videos, Events, Celebrity Moments, Memories, Success Stories, and CelebMix Articles; all chosen by our writers.

Did we include your favourite cover from 2019? If not, please let us know what your top covers of 2019 were on Twitter @CelebMix.