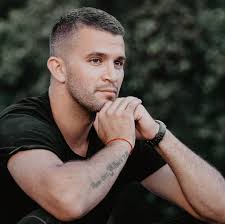 Croatian pop singer Damir Kedzo has won the ticket to Rotterdam to represent his country at Eurovision Song Contest 2020. Active since 2003, Kedzo first garnered attention when he participated in Story Super Nova Music Talent Show and later went on to win several accolades in his decade long career including the Grand Prix of the Slavic Baazar Festival in Vitebsk, Belarus, and the New Wave Festival in Sochi, Russia.

Kedzo is one of the most successful artists in Croatia today. Along with 15 other participants, the singer entered the national selection show “Dora 2020” which was broadcasted from the Marino Cvetkovi? Sports Hall. Below is the list of all the 16 participants and their songs:

The voting results were a mix of jury and public voting. As shared by Eurovision.tv, “HRT appointed 5 juries from all over Croatia that each consisted of three people; an HRT member, a Croatian Phonographic Association member and a Croatian Composers’ Society member.”

Kedzo’s song Divlji Vjetre topped the results with a total of 31 points. Delivering a powerful performance, Kedzo’s stage was solely focused on his vocal showcase. With a dramatic backdrop complemented by the team of background vocalists, the singer managed to exhibit a concert-worthy performance.

Last year, we saw Duncan Laurence winning the contest with a minimalistic performance that gave precedence to storytelling via the song over the stage set up. Both the methods exist in contrast and every year, we see the winners experiment with either of them to build their victory tale. It remains to be seen, how will he be able to create the same magic on the magnanimous stage of Rotterdam.

Damir Kedzo will be performing his song in the second half of first semi-final on 12th May. Are you excited? Share your thoughts via tweet @CelebMix.