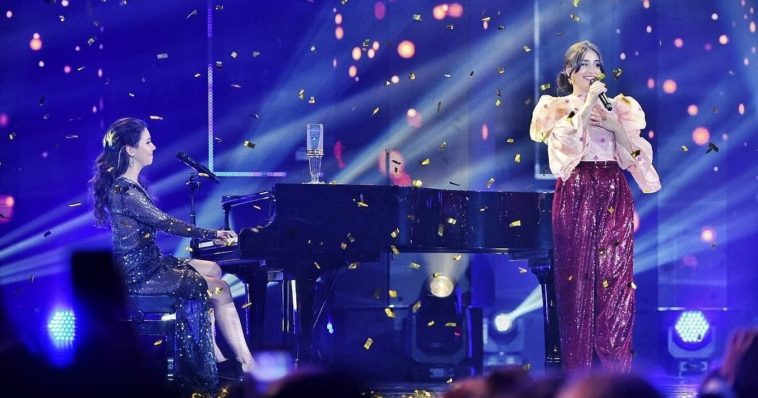 On the 18 March 2020, it was officially announced that the Eurovision Song Contest 2020 had been cancelled, which means all these amazing songs won’t get their chance to shine on the Eurovision stage and some acts may not even get the chance to represent their country. Portugal had chosen Elisa with her song “Medo de sentir” on 7 March 2020 through the national selection show Festival da Canção. She hasn’t been confirmed as their act for 2021, and it’s unlikely that she will since the national selection show is likely to take place again next year. As we await the 2021 contest, we will make sure that every song in the cancelled contest gets it’s time to shine, here on CelebMix.

Elisa, real name Maria Elisa Silva, is fairly new to the music industry, but she’s not new to the competition world, having competed in a number of contests over the past few years. It’s clear she’s ready to start her music career and going to Eurovision would’ve been a massive step, it’s such a shame she won’t get to grace the Eurovision 2020 stage.

Her voice is incredible and she placed second both in the jury vote and the public vote, clearly impressing all who watched her in Festival da Canção. She sang the song “Medo de sentir” which was written by Marta Carvalho who also performed with Elisa on stage – she was behind the piano with the additional vocals. She gave passion to the performance and it was clear she had connected with the song well. Second place went to the televote winner Bárbara Tinoco with “Passe-Partout” and the jury vote winner, Filipe Sambado with “Gerbera amarela do Sul” came third.

Portugal failed to make it through to the Grand Final last year when they were represented by Conan Osíris with “Telemóveis” and the previous year they came last in the Grand Final. Yet, the year before they went out and won it with Salvador Sobral with “Amar pelos dois”. This year could’ve been their turning point and maybe they were set to do well once again, but we will have to wait to see what Portugal has in store for 2021.

Eurovision 2020 may be cancelled but that doesn’t mean we can’t celebrate it this year, it doesn’t mean we can’t listen to the songs, and it doesn’t mean we forget about the artists either. Join us here on CelebMix this year as we continue the Eurovision party in the coming months whilst we’re all staying at home, looking after ourselves, and doing our best to stop the coronavirus. So why not check out the other acts from this year who would’ve been on the Eurovision 2020 stage, such as Blas Cantó for Spain, Hooverphonic for Belgium, VICTORIA for Bulgaria, Sandro for Cyprus, Vincent Bueno for Austria, Arilena Ara for Albania, Tornike Kipiani for Georgia, Jeangu Macrooy for the Netherlands, Vasil for North Macedonia, Tom Leeb for France, Benny Cristo for the Czech Republic, Eden Alene for Israel, Stefania for Greece, Montaigne for Australia, Samanta Tina for Latvia, Diodato for Italy, Destiny Chukunyere for Malta, Roxen for Romania, THE ROOP for Lithuania, Ulrikke Brandstorp for Norway, Athena Manoukian for Armenia, Alicja Szemplinska for Poland, James Newman for the UK, Samira Efendi for Azerbaijan, Ana Soklic for Slovenia, Ben Dolic for Germany, Uku Suviste for Estonia, Daði og Gagnamagnið for Iceland, Natalie Gordienko for Moldova, Ben & Tan for Denmark, Roxen for Romania, Gjon’s Tears for Switzerland, Go_A for Ukraine, The Mamas for Sweden, VAL for Belarus, Senhit for San Marino, Damir Kedzo for Croatia, Lesley Roy for Ireland, and Aksel for Finland.

What do you make of Elisa and her song “Medo de sentir” which would’ve represented Portugal at Eurovision 2020? Let us know on Twitter @CelebMix.